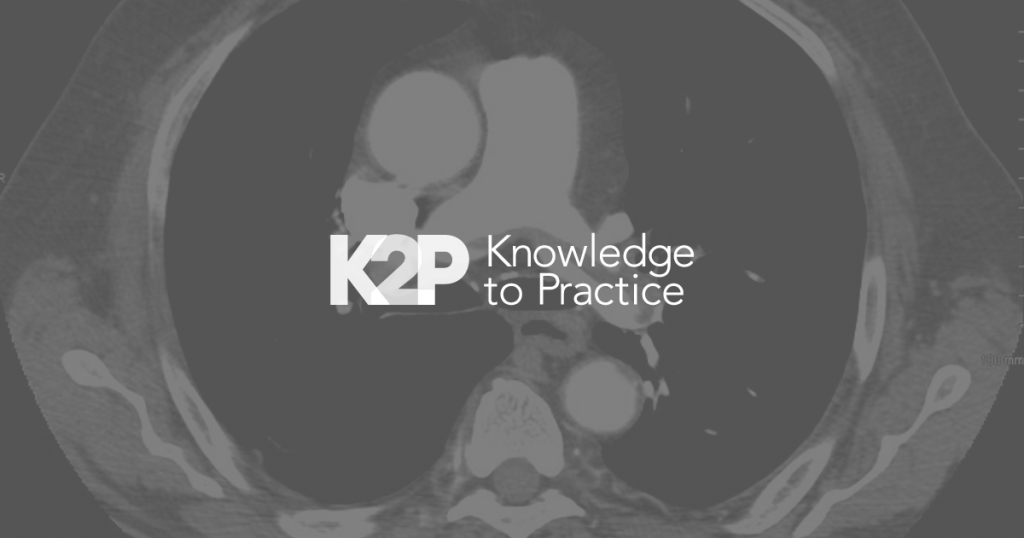 Pulmonary disease has been on the forefront of concern in recent months. Included in care management for acute pulmonary diseases is knowledge of the latest evidence associated with treatment for pulmonary embolism.

With the publication of the September 2019 ESC Guidelines for Acute Pulmonary Embolism,  significant updates in recommendations have occurred, including, among several,  a Class I recommendation for referral to an expert chronic thromboembolic pulmonary hypertension center for those symptomatic patients with mismatched defects on  V/Q scan > 3 months post- acute PE.

Review evidence-based care for prevention of complications and recurrence post- PE, as well as chronic therapeutic management of these patients with Dr. Phil Green in K2P’s module entitled. For CurrentMD users, the module is linked below. Please check out the full transcript of the lecture below.

By the end of this activity, you should be able to:

Question 3: Indefinite treatment with anticoagulation reduced the risk of recurrent venous thromboembolism by:

Eighteen patients died within two days of the presentation, about 8%. Thirty-two patients presented with recurrent venous thromboembolism, two-thirds of which occurred after stopping anticoagulation. And seven patients or 4% of those patients developed chronic thromboembolic pulmonary hypertension.

Post-thrombotic syndrome is defined as chronic pain edema and fatigue of an affected limb after deep venous thrombosis.

Patients with post-thrombotic syndrome have an overall lower quality of life and less improvement in symptoms over time with conventional therapy.

Forty-three percent of the patients in catheter-directed group versus 71% of the patients in the control group developed post thrombotic syndrome with a 28% absolute risk reduction. However, there was no difference in quality of life or bleeding.

The primary objective was to determine if percutaneous pharmacomechanical catheter-directed therapy reduced the development of post-thrombotic syndrome after 24 months compared to standard DVT therapy alone.

The results of this trial were relatively disappointing.

PCDT did not reduce the incidence of post-thrombotic syndrome compared to anticoagulation alone. When iliofemoral DVT was looked at as a subgroup, there was a reduction in the development of moderate to severe post-thrombotic syndrome with 18% in the percutaneous catheter-directed therapy arm versus 28% with standard anticoagulation without catheter-directed therapy. When femoral popliteal DVT was looked at, there was no difference at all.

So, there is a hypothesis that in the more severe iliofemoral DVT, percutaneous clot reduction therapy is effective at reducing post-thrombotic syndrome. It's important to note that percutaneous catheter-directed therapy was less effective in the elderly group.

How about preventing recurrence of venous thromboembolism?

What's the role of IVC filter, anticoagulation or other therapies?

The role of the inferior vena cava filter is quite limited from that perspective. Venous filters are usually placed in the infrarenal portion of the inferior vena cava. They're indicated in patients with acute pulmonary embolism who have absolute contraindication to anticoagulation and in patients with objectively confirmed recurrent pulmonary embolism despite adequate anticoagulation.

Filter overuse and failure to remove temporary IVC filters remain a significant problem. And the long-term sequelae of filters can be significant with filter embolization, fracture and break down.

European guidelines say that for provoked pulmonary embolism, anticoagulation treatment for three months after provocation is no longer present.

After withdrawal of anticoagulation treatment, the risk of recurrence, and the anticoagulants are stopped after 6 or 12 months, can be similar to that of after 3 months. And indefinite treatment with anticoagulants does reduce the risk of VTE by about 90%, but this benefit is partially offset by a 1% or higher of annual risk of major bleeding.

Anticoagulation is discontinued when a perceived risk of anticoagulation, risk of bleeding and the inconvenience of remaining on treatment outweigh the risk of recurrent VT.

Extended Treatment for Prevention of Recurrence

Extended treatment for the prevention of recurrent multiple oral anticoagulant drugs have been shown to prevent recurrent venous thromboembolism in patients with pulmonary embolism. Guidelines have not yet standardized criteria for extended treatment in the absence of ongoing provocation like incurable malignancy. We will review the data of our extended treatment using apixaban as one example.

The AMPLIFY-EXTEND study enrolled patients who are treated for 6 to 12 months with anticoagulation therapy for objectively confirmed symptomatic proximal DVT or pulmonary embolism without recurrence.

The findings of the study were remarkable in the 2.5 twice daily Eliquis dose arm, it was a 67% relative risk reduction and an 8% absolute risk reduction in recurrent VTE or all-cause death compared to the placebo arm. And remarkably, no increase in major bleeding whatsoever.

We focused on the 2.5 mg apixaban dose because that was the dose that was ultimately FDA-approved for extended therapy.

Based on this data and other studies, it's reasonable to consider extended therapy in patients with a low bleeding risk profile who are at risk for recurrent venous thromboembolic events.

We're going to turn now to our assessment questions.

Answers A, B, and C are all correct. We discussed that any patient with a venous thromboembolic event has an increased risk for a future venous thromboembolic event via the DVT or a PE. That risk is reduced after the curative treatment. That risk never goes to zero. Chronic thromboembolic pulmonary hypertension in the relatively unselected group of patients with pulmonary embolism occurs in about 4% of the population. And some degree of post-thrombotic syndrome, lower extremity symptoms in the affected limb with the DVT occur in about 40% of patients with deep venous thrombosis.

Question 3: Indefinite treatment with anticoagulation reduces the risk of venous thromboembolism by:

Here, the correct answer is 90%. There is a relative risk reduction of 90% when anticoagulation is used to prevent recurrent venous thromboembolism, but the benefit is partially offset by 1% or higher annual risk of major bleeding.

Question 3: Indefinite treatment with anticoagulation reduces the risk of venous thromboembolism by:

After completing this activity, you should now be able to: